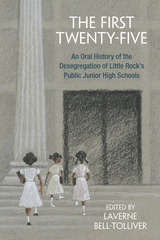 “It was one of those periods that you got through, as opposed to enjoyed. It wasn’t an environment that . . . was nurturing, so you shut it out. You just got through it. You just took it a day at a time. You excelled if you could. You did your best. You felt as though the eyes of the community were on you.”—Glenda Wilson, East Side Junior High

Much has been written about the historical desegregation of Little Rock Central High School by nine African American students in 1957. History has been silent, however, about the students who desegregated Little Rock’s five public junior high schools—East Side, Forest Heights, Pulaski Heights, Southwest, and West Side—in 1961 and 1962.

The First Twenty-Five gathers the personal stories of these students some fifty years later. They recall what it was like to break down long-standing racial barriers while in their early teens—a developmental stage that often brings emotional vulnerability. In their own words, these individuals share what they saw, heard, and felt as children on the front lines of the civil rights movement, providing insight about this important time in Little Rock, and how these often painful events from their childhoods affected the rest of their lives.