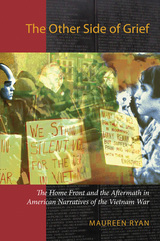 The lingering aftereffects of the Vietnam War resonate to this day throughout American society: in foreign policy, in attitudes about the military and war generally, and in the contemporary lives of members of the so-called baby boom generation who came of age during the 1960s and early 1970s. While the best-known personal accounts of the war tend to center on the experience of combat, Maureen Ryan’s The Other Side of Grief examines the often overlooked narratives—novels, short stories, memoirs, and films—that document the war’s impact on the home front. In analyzing the accounts of Vietnam veterans, women as well as men, Ryan focuses on the process of readjustment, on how the war continued to insinuate itself into their lives, their families, and their communities long after they returned home. She looks at the writings of women whose husbands, lovers, brothers, and sons served in Vietnam and whose own lives were transformed as a result. She also appraises the experiences of the POWs who came to be embraced as the war’s only heroes; the ordeal of Vietnamese refugees who fled their “American War” to new lives in the United States; and the influential movement created by those who committed themselves to protesting the war. The end result of Ryan’s investigations is a cogent synthesis of the vast narrative literature generated by the Vietnam War and its aftermath. Together those stories powerfully demonstrate how deeply the legacies of the war penetrated American culture and continue to reverberate still.
AUTHOR BIOGRAPHY
Maureen Ryan is professor of English at the University of Southern Mississippi.
TABLE OF CONTENTS