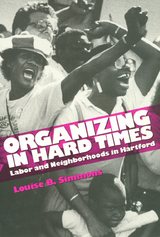 In 1990, Hartford, Connecticut, ranked as the eight poorest city in the country by the census; the real estate market was severely depressed; downtown insurance companies were laying off and the retail department stores were closing; public services were strained; and demolition sites abandoned for lack of funds pockmarked the streets. Hartford's problems are typical of those experienced in numerous U.S. cities affected by a lingering recession.

The harsh economic times felt throughout the city's workplaces and neighborhoods precipitated the formation of grassroots alliances between labor and community organizations. Coming together to create new techniques, their work has national implications for the development of alternative strategies for stimulating economic recovery.

In the series Labor and Social Change, edited by Paula Rayman and Carmen Sirianni.
AUTHOR BIOGRAPHY
Louise B. Simmons is Director of the University of Connecticut Urban Semester Program.
TABLE OF CONTENTS