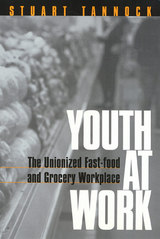 Young people often work in some of the lowest-paying, lowest-status jobs there are -- in dead end jobs or "McJobs" in retail, food, and entertainment service sectors. They have lower wages, fewer benefits, less job security, and are less likely to be unionized than any other age group in the workforce. Employers of young workers, by contrast, frequently rank among the world's most powerful corporations. Despite their importance to the service economy, young workers are often ignored or stereotyped by researchers, policymakers, and  trade unions.

This interview-based study of 95 young unionized fast-food and grocery workers in two cities in the U.S. and Canada presents a detailed account of their experiences in their workplaces and in their unions. These young workers vividly describe their daily tasks of frying, serving, bagging, stocking, and cleaning up, and the pressures from management and customers that surround these tasks. Management control tactics they encounter include video surveillance, drug testing, and monitoring of worker service scripts by mystery shoppers. The workers also document the hazards -- muscle injuries, burns, and robberies -- and the responsibilities of their jobs, including the emotional labor of customer relations.

The book suggests that young service sector workers have a distinct workforce identity as "stopgap workers." Society, employers, and even some unions often dismiss young workers as not being "real" workers, since these youths are seen as being in transition between school and "adult" career forms of employment. The collective activism of unions may offer hope not just for improving service sector work, but for educating young workers and providing them with a voice in shaping their own temporary work conditions.
AUTHOR BIOGRAPHY
Stuart Tannock is a Lecturer in the Program in Social and Cultural Studies in the Graduate School of Education at the University of California, Berkeley.
TABLE OF CONTENTS

Part I: Youth and Work
1. Dead Ends
2. On the Front Lines of the Service Sector