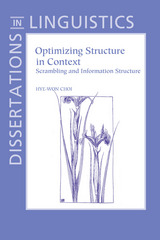 This book examines the scrambling phenomena in German and Korean from the perspective that different ordering possibilities are motivated and constrained by interactions among syntactic, semantic, and discourse principles. Using Optimality Theory, Optimizing Structure in Context demonstrates how these principles from different modules of grammar interact and thus resolve conflicts among themselves to yield the most optimal output, that is, a sentence with a particular word order, in a given semantic and discoursal context. This way, it explains various meaning-related effects associated with scrambling such as definiteness effect and focus effect. While developing constraints in the discourse domain, it also proposes a new model of information structure based on basic discourse features. By expanding the core idea of constraint interaction in Optimality Theory to interactions 'between' modules of grammar as well as 'between', this book provides a model of interface theory.
TABLE OF CONTENTS