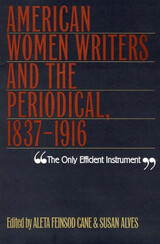 Many farsighted women writers in nineteenth-century America made thoughtful and sustained use of newspapers and magazines to effect social and political change. “The Only Efficient Instrument”: American Women Writers and the Periodical, 1837-1916 examines these pioneering efforts and demonstrates that American women had a vital presence in the political and intellectual communities of their day.

Women writers and editors of diverse social backgrounds and ethnicities realized very early that the periodical was a powerful tool for education and social reform—it was the only efficient instrument to make themselves and their ideas better known. This collection of critical essays explores American women's engagement with the periodical press and shows their threefold use of the periodical: for social and political advocacy; for the critique of gender roles and social expectations; and for refashioning the periodical as a more inclusive genre that both articulated and obscured such distinctions as class, race, and gender.

Including essays on familiar figures such as Margaret Fuller, Harriet Beecher Stowe, Kate Chopin, and Charlotte Perkins Gilman, “The Only Efficient Instrument” also focuses on writings from lesser-known authors, including Native American Zitkala-Sä, Mexican American María Cristina Mena, African American Frances Ellen Watkins Harper, and the Lowell factory workers. Covering nearly eighty years of publishing history, from the press censure of the outspoken Angelina Grimké in 1837 to the last issue of Gilman's Forerunner in 1916, this fascinating collection breaks new ground in the study of the women's rights movement in America.

AUTHOR BIOGRAPHY
Aleta Cane teaches at Northeastern University in Boston and is currently a nonresident fellow at Harvard's W.E.B. DuBois Institute for African American Research.
Susan Alves is curriculum coordinator for the English Department at Rockport (Mass.) High School and a senior lecturer for the Adult and Continuing Education Department at Northeastern University.
TABLE OF CONTENTS