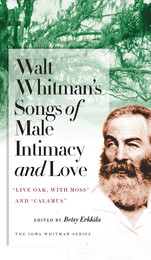 The volume begins with Whitman’s elegantly handwritten manuscript of the “Live Oak, with Moss” poems, printed side by side with a typeset transcription and followed by a facsimile of the 1860 version of the “Calamus” poems. The concluding section reprints the final version of the “Calamus” poems from the 1881 edition of Leaves of Grass. In an afterword, Erkkila discusses the radical nature of these poems in literary, sexual, and social history; the changes Whitman made in the “Live Oak” and “Calamus” poems in the post–Civil War and Reconstruction years; the literary, political, and other contests surrounding the poems; and the constitutive role the poems have played in the emergence of modern heterosexual and homosexual identity in the United States and worldwide. The volume closes with a selected bibliography of works that have contributed to the critical and interpretive struggles around Whitman’s man-loving life.

One hundred and fifty years after Whitman’s brave decision to speak publicly about a fully realized democracy, his country is still locked in a struggle over the rights of homosexuals. These public battles have been at the very center of controversies over the life, work, and legacy of Walt Whitman, America’s (and the world’s) major poet of democracy and its major singer of what he called “manly love” in all its moods. Together the poems in this omnibus volume affirm his creation of a radical new language designed to convey and affirm the poet’s man love.

Betsy Erkkila is the Henry Sanborn Noyes Professor of Literature at Northwestern University. She is the author of Mixed Bloods and Other American Crosses: Rethinking American Literature from the Revolution to the Culture Wars, The Wicked Sisters: Women Poets, Literary History, and Discord, Whitman the Political Poet, and Walt Whitman among the French: Poet and Myth.