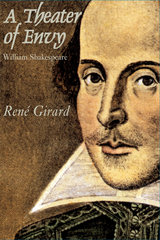 In this ground-breaking work, one of our foremost literary and cultural critics turns to the major figure in English literature, William Shakespeare, and proposes a dramatic new reading of nearly all his plays and poems. The key to A Theater of Envy is Girard’s novel reinterpretation of "mimesis." For Girard, people desire objects not for their intrinsic value, but because they are desired by someone else – we mime or imitate their desires. This envy – or "mimetic desire" – he sees as one of the foundations of the human condition.

Bringing such provocative and iconoclastic insights to bear on Shakespeare, Girard reveals the previously overlooked coherence of problem plays like Troilus and Cressida, and makes a convincing argument for elevating A Midsummer Night’s Dream from the status of a chaotic comedy to a masterpiece. The book abounds with novel and provocative interpretations: Shakespeare becomes "a prophet of modern advertising," and the threat of nuclear disaster is read in the light of Hamlet. Most intriguing of all, perhaps, is a brief, but brilliant aside in which an entirely new perspective is brought to the chapter on Joyce’s Ulysses in which Stephen Dedalus gives a lecture on Shakespeare. In Girard’s view only Joyce, perhaps the greatest of twentieth-century novelists, comes close to understanding the greatest of Renaissance playwrights.

Throughout this impressively sustained reading of Shakespeare, Girard’s prose is sophisticated, but contemporary, and accessible to the general reader.