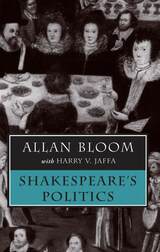 Shakespeare's Politics
by Allan Bloom
University of Chicago Press, 1981
Paper: 978-0-226-06041-5
Taking the classical view that the political shapes man's consciousness, Allan Bloom considers Shakespeare as a profoundly political Renaissance dramatist. He aims to recover Shakespeare's ideas and beliefs and to make his work once again a recognized source for the serious study of moral and political problems.

In essays looking at Julius Caesar, Othello, and The Merchant of Venice, Bloom shows how Shakespeare presents a picture of man that does not assume privileged access for only literary criticism. With this claim, he argues that political philosophy offers a comprehensive framework within which the problems of the Shakespearean heroes can be viewed. In short, he argues that Shakespeare was an eminently political author. Also included is an essay by Harry V. Jaffa on the limits of politics in King Lear.

"A very good book indeed . . . one which can be recommended to all who are interested in Shakespeare." —G. P. V. Akrigg

"This series of essays reminded me of the scope and depth of Shakespeare's original vision. One is left with the impression that Shakespeare really had figured out the answers to some important questions many of us no longer even know to ask."-Peter A. Thiel, CEO, PayPal, Wall Street Journal


1: Introduction: Political Philosophy and Poetry
2: On Christian and Jew: The Merchant of Venice
3: Cosmopolitan Man and the Political Community: Othello
4: The Morality of the Pagan Hero: Julius Caesar
5: The Limits of Politics: King Lear, Act I, Scene i
Harry V. Jaffa
Acknowledgments
Index