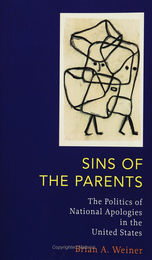 Debates have swirled around the question of national forgiveness for the past fifty years. Using two examples—the land claims of the Oneida Indians and the claims for reparations to Japanese Americans interned during World War II—Brian Weiner suggests a way of thinking about national misdeeds. Arguing beyond collective "innocence" or "guilt," Sins of the Parents offers a model of collective responsibility to deal with past wrongs in such a way as to reinvigorate our notion of citizenship. Drawing upon the writings of Abraham Lincoln and Hannah Arendt, Weiner offers a definition of political responsibility that at once defines citizenship and sidesteps the familial, racial, and ethnic questions that often ensnare debates about national apologies. An original contribution to political theory and practice, Sins of the Parents will become a much discussed contribution in the debate about what it is to be an American.
AUTHOR BIOGRAPHY
Brian A. Weiner is Associate Professor of Politics at the University of San Francisco.
REVIEWS
"Sins of the Parents grapples with the problem of intergenerational responsibility in the context of American political history. It is a work that is sensitive to the contested uses of the past, sophisticated in its deployment of an Arendtian vision of forgiveness, and unabashed in its project of expanding our conception of citizenship."—P.E. Digeser, author of Political Forgiveness


AcknowledgmentsIntroduction: Past Wrongs, Present Responsibilities?1. The Promises of Great Nations: The Oneida Land Claims Cases2. Explaining (away) The Misdeeds of Political Ancestors: The Civil Liberties Act of 19883. The Birth and Death of Political Memories4. The Political Responsibilities of Citizens5. The Political Promise and Limitations of National ApologiesConclusion: Citizenship in the Shadows of MisdeedsNotesBibliographyIndex