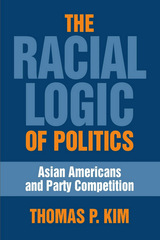 As he systemically studies the barriers that Asian Americans face in the electoral and legislative processes, Thomas Kim shows how racism is embedded in America's two-party political system.Here Kim examines the institutional barriers that Asian Americans face in the electoral and legislative processes. Utilizing approaches from ethnic studies and political science, including rational choice theory, he demonstrates how the political logic of two-party competition actually works against Asian American political interests. According to Kim, political party leaders recognize that Asian Americans are tagged with "ethnic markers" that label them as immutably "foreign," and as such, parties cannot afford to be too closely associated with (racialized) Asian Americans. In publicly repudiating Asian American efforts to gain political power, Kim asserts, party elites are making rational, strategic calculations.Although other commentators have blamed the diversity of the Asian American population for its lack of political success, Kim argues convincingly that race itself is the chief barrier to political participation—and it will not be overcome simply by electing or appointing more Asian Americans to political office.
AUTHOR BIOGRAPHY
Thomas P. Kim is Associate Professor of Politics & International Relations at Scripps College, and Core Faculty in the Intercollegiate Department of Asian American Studies at the Claremont Colleges.
TABLE OF CONTENTS

Chapter 5: Silence, Mobilization, and the Future of Asian American Politics