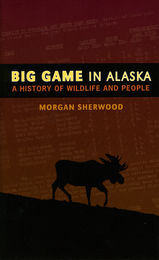 Big Game in Alaska: A History of Wildlife and People
by Morgan B. Sherwood
University of Alaska Press, 2008
Paper: 978-1-60223-034-7
With the Klondike gold rush, a struggle erupted in Alaska between the protection of big game animals and man’s economic ambitions, a riveting story chronicled by Morgan Sherwood in Big Game in Alaska.
In concise and clear prose, Sherwood charts the history of this environmental and political conflict, examining the creation of the Alaska Game Commission in the early 1930s, the use of distorted science and menacing technologies, the antipathy of farmers and fishermen toward animals, and the prevailing belief in man’s right to shoot wild animals at will. An incisive historical study of the flawed attempts to govern big game predation, Big Game in Alaska will be essential reading for historians and environmentalists alike.
AUTHOR BIOGRAPHY
Morgan Sherwood is an independent historian and the author of Alaska and the Pacific Rim and Exploration of Alaska, 1865–1900.
TABLE OF CONTENTS


List of Illustrations
Acknowledgments
The General and the Game Wardens
The Laws: Duck Eggs and Provocative Bears
The Laws: Nelson's Victory and More Provocative Bears
The Science of Wildlife and Technology of Hunting
The Hunted
The Motives
The Native Hunters
The Euro-American Hunters
Buckner versus Dufresne and O'Connor
The Biggest Shoot-out and the End of an Era
Afterword: A Big Game Plan
Abbreviations Used in the Notes
Notes
Bibliography
Index