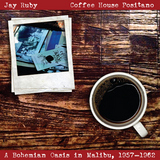 Coffee House Positano: A Bohemian Oasis in Malibu, 1957–1962
by Jay Ruby
University Press of Colorado, 2013
eISBN: 978-1-60732-272-6
This unique auto-ethnographic study of life at the Coffee House Positano—a Bohemian coffee house in Malibu, California—during the late 1950s and early 1960s is a combination of historical reconstruction and personal memoir. An ebook consisting of a collection of memories expressed through multiple formats—text, image, audio, and video—it describes in illuminating detail the great range of people who frequented Positano and the activities that took place there over its short but influential existence.

As an ethnographer analyzing his own culture, author Jay Ruby uses a unique ethnographic method known as “studying sideways.” He combines the exploration of self and others with the theoretical framework of anthropology to provide deep insight into the counterculture of late 1950s and early 1960s America. He shares his connection to Positano, where he lived and worked from 1957 to 1959 and again in 1963, and reflects on Positano in the context of US counterculture and the greater role of countercultures in society.

This intimate and significant work will be of interest to anthropologists as well as scholars and the general reader interested in California history, Beat culture, and countercultural movements.

AUTHOR BIOGRAPHY
Jay Ruby is an emeritus professor, a former director of a graduate program in the anthropology of visual communication at Temple University in Philadelphia, and a leader in the field of visual anthropology and multimedia ethnography.
REQUEST ACCESSIBLE FILE