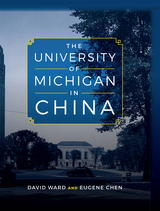 The friendship between the University of Michigan and China spans more than a century and a half. Through years of peace and years of war; through political turmoil and the shifting winds of public opinion; since the first years of U-M’s Ann Arbor campus and the last years of China’s Qing Dynasty, the University and China have been partners.

This book tells the story of twenty remarkable individuals, the country they transformed, and the University that helped them do it. There are many “firsts” in this book—first Chinese students at U-M, first female college president of China—and there are many “fathers” of disciplines: Wu Dayou, father of physics in China; Zheng Zuoxin, father of Chinese ornithology; Zeng Chengkui, father of marine botany.

While much has been written about these leaders and scholars in both English and Chinese, nowhere else is their collective story told or their shared bond with the University of Michigan celebrated.

The University of Michigan in China celebrates this nearly 200-year-old legacy.
AUTHOR BIOGRAPHY
Dr. Eugene Chen is the endowed Frederick G.L. Huetwell Professor of Cardiovascular Medicine at the University of Michigan. Dr. Chen is the current President of the U-M Association of Chinese Professors (UMACP). In addition to his professional work, Dr. Chen has a great interest in studying U-M’s legacy of training transformative leaders. This book is dedicated to U-M’s 2017 Bicentennial from the UMACP.

David Ward is a graduate of the University of Michigan’s MFA program in Creative Writing. He has taught at the Shanghai Jiao Tong University Joint Institute and now teaches writing at U-M. His work is published or forthcoming from Black Warrior Review, ISLE: Association For the Study of Literature and Environment, and Rivet.