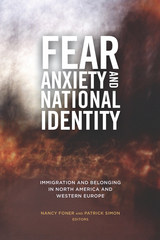 Fifty years of large-scale immigration has brought significant ethnic, racial, and religious diversity to North America and Western Europe, but has also prompted hostile backlashes. In Fear, Anxiety, and National Identity, a distinguished multidisciplinary group of scholars examine whether and how immigrants and their offspring have been included in the prevailing national identity in the societies where they now live and to what extent they remain perpetual foreigners in the eyes of the long-established native-born. What specific social forces in each country account for the barriers immigrants and their children face, and how do anxieties about immigrant integration and national identity differ on the two sides of the Atlantic?

Western European countries such as Germany, the Netherlands, and the United Kingdom have witnessed a significant increase in Muslim immigrants, which has given rise to nativist groups that question their belonging. Contributors Thomas Faist and Christian Ulbricht discuss how German politicians have implicitly compared the purported “backward” values of Muslim immigrants with the German idea of Leitkultur, or a society that values civil liberties and human rights, reinforcing the symbolic exclusion of Muslim immigrants. Similarly, Marieke Slootman and Jan Willem Duyvendak find that in the Netherlands, the conception of citizenship has shifted to focus less on political rights and duties and more on cultural norms and values. In this context, Turkish and Moroccan Muslim immigrants face increasing pressure to adopt “Dutch” culture, yet are simultaneously portrayed as having regressive views on gender and sexuality that make them unable to assimilate.

Religion is less of a barrier to immigrants’ inclusion in the United States, where instead undocumented status drives much of the political and social marginalization of immigrants. As Mary C. Waters and Philip Kasinitz note, undocumented immigrants in the United States. are ineligible for the services and freedoms that citizens take for granted and often live in fear of detention and deportation. Yet, as Irene Bloemraad points out, Americans’ conception of national identity expanded to be more inclusive of immigrants and their children with political mobilization and changes in law, institutions, and culture in the wake of the Civil Rights Movement. Canadians’ views also dramatically expanded in recent decades, with multiculturalism now an important part of their national identity, in contrast to Europeans’ fear that diversity undermines national solidarity.

With immigration to North America and Western Europe a continuing reality, each region will have to confront anti-immigrant sentiments that create barriers for and threaten the inclusion of newcomers. Fear, Anxiety, and National Identity investigates the multifaceted connections among immigration, belonging, and citizenship, and provides new ways of thinking about national identity.