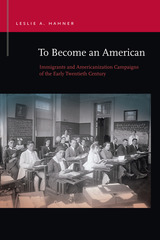 Pledging allegiance, singing the “Star-Spangled Banner,” wearing a flag pin—these are all markers of modern patriotism, emblems that announce the devotion of American citizens. Most of these nationalistic performances were formulized during the early twentieth century and driven to new heights by the panic surrounding national identity during World War I. In To Become an American Leslie A. Hahner argues that, in part, the Americanization movement engendered the transformation of patriotism during this period. Americanization was a massive campaign designed to fashion immigrants into perfect Americans—those who were loyal in word, deed, and heart. The larger outcome of this widespread movement was a dramatic shift in the nation’s understanding of Americanism. Employing a rhetorical lens to analyze the visual and aesthetic practices of Americanization, Hahner contends that Americanization not only tutored students in the practices of citizenship but also created a normative visual metric that modified how Americans would come to understand, interpret, and judge their own patriotism and that of others.
AUTHOR BIOGRAPHY
Leslie A. Hahner is an Associate Professor of Communication at Baylor University. Her work explores how rhetoric shapes public culture, primarily by analyzing the ways visual artifacts and experiences constitute aesthetic values. Her work has appeared in the Quarterly Journal of Speech, Rhetoric & Public Affairs, Critical Studies in Media Communication, Communication and Critical/Cultural Studies, and Argumentation and Advocacy, among many other outlets.
REVIEWS
2017 NCA American Studies Division Book Award
— 2017 NCA American Studies Division Book Award