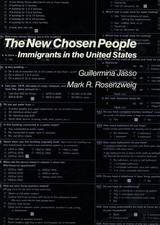 Stories of immigrant success have traditionally illustrated the basic principles of political and economic freedom in the United States. In reality, the presence and achievements of the foreign-born are the complex result of attitudes, choices, and decisions, not only of the immigrants themselves but also of the U.S. government and its native-born citizens. Based on census data and government administrative records, The New Chosen People presents a comprehensive picture of this interaction as the authors examine immigrant behavior in the United States. Jasso and Rosenzweig trace the factors that influence the immigrants' adjustment and achievements in a broad area of concerns—learning English, finding work and earning a living, and raising a family. The authors devote special attention to family relationships—kinship migration, family reunification, and the marriage market—and to the factors determining where immigrants choose to settle. Jasso and Rosenzweig also consider the situation of the largest recent groups of refugees—Cubans and Indochinese—who have entered the U.S. under very different rules than those governing the selection of immigrants from other countries. They also look at how the foreign-born population has changed over time, drawing comparisons between post-1960 immigrants and those of 1900 through 1910. For all foreign-born, the authors discuss the factors that influence decisions to naturalize and the economic and social consequences of achieving legal status. Jasso and Rosenzweig also detail the policy choices that affect the composition of the foreign-born population. What criteria determine who is eligible to enter the country? How do these regulations differ for each country of origin, and how have they changed over the years? The New Chosen People emphasizes the determining influence of choice and selection on the foreign-born population of the United States. For policymakers and social scientists, the book provides a valuable assessment of the economic and social well-being of the nation and its newcomers. A Volume in the Russell Sage Foundation Census Series
AUTHOR BIOGRAPHY
GUILLERMINA JASSO is professor of sociology at the University of Iowa. MARK R. ROSENZWEIG is professor of economics at the University of Pennsylvania.
TABLE OF CONTENTS


INTRODUCTION 1 1 HOW THE CHOSEN ARE CHOSEN 26 2 TAKING ROOT: NATURALIZATION 98 3 TAKING LEAVE: EMIGRATION 122 4 THE MARRIAGE MARKET AND THE MELTING POT 153 5 FAMILY REUNIFICATION AND FAMILY STRUCTURE 188 6 SPONSORSHIP, FAMILY REUNIFICATION, AND THE IMMIGRATION MULTIPLIER 212 7 IMMIGRANTS IN THE U.S. ECONOMY 237 8 ENGLISH LANGUAGE PROFICIENCY AND THE LOCATIONAL CHOICES OF IMMIGRANTS 308 9 FINDING REFUGE IN THE UNITED STATES 338 10 THE IMMIGRANT'S LEGACY: INVESTING IN THE NEXT GENERATION 382 11 THE IMMIGRANTS OF THE 1980s: ASSESSING THE 1965-1980 REFORMS 411