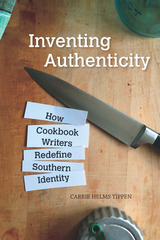 In Inventing Authenticity, Carrie Helms Tippen examines the rhetorical power of storytelling in cookbooks to fortify notions of southernness. Tippen brings to the table her ongoing hunt for recipe cards and evaluates a wealth of cookbooks with titles like Y’all Come Over and Bless Your Heart and famous cookbooks such as Sean Brock’s Heritage and Edward Lee’s Smoke and Pickles. She examines her own southern history, grounding it all in a thorough understanding of the relevant literature. The result is a deft and entertaining dive into the territory of southern cuisine—“black-eyed peas and cornbread,fried chicken and fried okra, pound cake and peach cobbler,”—and a look at and beyond southern food tropes that reveals much about tradition, identity, and the yearning for authenticity.

Tippen discusses the act of cooking as a way to perform—and therefore reinforce—the identity associated with a recipe, and the complexities inherent in attempts to portray the foodways of a region marked by a sometimes distasteful history. Inventing Authenticity meets this challenge head-on, delving into problems of cultural appropriation and representations of race, thorny questions about authorship, and more. The commonplace but deceptively complex southern cookbook can sustain our sense of where we come from and who we are—or who we think we are.