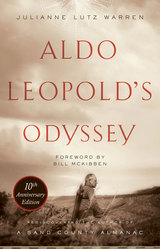 "Aldo Leopold’s Odyssey enriches our appreciation of both Leopold and A Sand County Almanac."
— Science