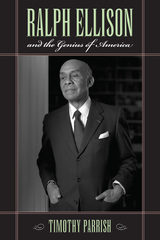 Ralph Ellison has long been admired as the author of one of the most important American novels of the twentieth century, Invisible Man. Yet he has also been dismissed by some critics as a writer who only published one major work of fiction and a black intellectual out of touch with his times. In this book, Timothy Parrish offers a fundamentally different assessment of Ellison's legacy, describing him as the most important American writer since William Faulkner and someone whose political and cultural achievements have not been fully recognized.

Embracing jazz artist Wynton Marsalis's characterization of Ellison as the unacknowledged "political theorist" of the civil rights movement, Parrish argues that the defining event of Ellison's career was not Invisible Man but the 1954 Supreme Court decision that set his country on the road to racial integration. In Parrish's view, no other American intellectual, black or white, better grasped the cultural implications of the new era than Ellison did; no other major American writer has been so misunderstood.

Drawing on Ellison's recently published "unfinished" novel, newly released archival materials, and unpublished correspondence, Parrish provides a sustained reconsideration of the writer's crucial friendships with Richard Wright, Robert Penn Warren, and C. Vann Woodward to show how his life was dedicated to creating an American society in which all could participate equally. By resituating Ellison's career in the historical context of its making, Parrish challenges the premises that distorted the writer's reception in his own lifetime to make the case for Ellison as the essential visionary of post–Civil War America.
AUTHOR BIOGRAPHY
Timothy Parrish is professor of English at Florida State University. He is author of Walking Blues: Making Americans from Emerson to Elvis (2001) and From Civil War to the Apocalypse: Postmodern History and American Fiction (2008), both published by the University of Massachusetts Press.
REVIEWS
-- Charles Johnson