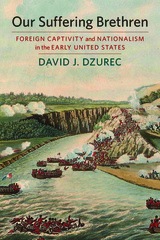 In October 1785, American statesman John Jay acknowledged that the more his countrymen "are treated ill abroad, the more we shall unite and consolidate at home." Behind this simple statement lies a complicated history. From the British impressment of patriots during the Revolution to the capture of American sailors by Algerian corsairs and Barbary pirates at the dawn of the nineteenth century, stories of Americans imprisoned abroad helped jumpstart democratic debate as citizens acted on their newly unified identity to demand that their government strengthen efforts to free their fellow Americans. Deliberations about the country's vulnerabilities in the Atlantic world reveal America's commitment to protecting the legacy of the Revolution as well as growing political divisions.

Drawing on newspaper accounts, prisoner narratives, and government records, David J. Dzurec III explores how stories of American captivity in North America, Europe, and Africa played a critical role in the development of American political culture, adding a new layer to our understanding of foreign relations and domestic politics in the early American republic.
AUTHOR BIOGRAPHY
DAVID J. DZUREC III is associate professor of history at the University of Scranton.
REVIEWS
<P>The scholarship in this book is very sound and up-to-date, and the author is clearly aware of, and conversant with, several different bodies of scholarship that bear on this topic.</P> <P>Our Suffering Brethren deserves to be read by early Americanists and their students. Dzurec makes a compelling case for the development of American identity through foreign captivity and how Americans crafted their relationship with and understanding of their government.</P>