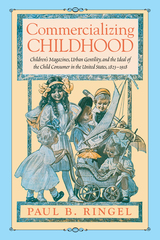 Long before activists raised concerns about the dangers of commercials airing during Saturday morning cartoons, America's young people emerged as a group that businesses should target with goods for sale. As print culture grew rapidly in the nineteenth century, enterprising publishers raced to meet the widespread demand for magazines aimed at middle- and upper-class children, especially those whose families had leisure time and cultural aspirations to gentility. Advertisers realized that these children represented a growing market for more than magazines, and the editors chose stories to help model good consumer behavior for this important new demographic.

In this deeply researched and engaging book, Paul B. Ringel combines an analysis of the stories in nineteenth-century American children's magazines with the backstories of their authors, editors, and publishers to explain how this hugely successful industry trained generations of American children to become genteel consumers. Ringel demonstrates how these publications, which were read in hundreds of thousands of homes, played to two conflicting impulses within American families: to shield children from commercial influences by offering earnest and moral entertainment and to help children learn how to prosper in an increasingly market-driven society.
AUTHOR BIOGRAPHY
Paul B. Ringel is associate professor of history at High Point University.