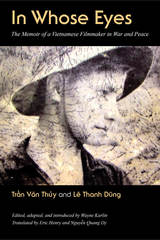 Trn Van Thuy is a celebrated Vietnamese filmmaker of more than twenty award-winning documentaries. A cameraman for the People's Army of Vietnam during the Vietnam War, he went on to achieve international fame as the director of films that address the human costs of the war and its aftermath.

Thuy's memoir, when published in Vietnam in 2013, immediately sold out. In this translation, English-language readers are now able to learn in rich detail about the life and work of this preeminent artist. Written in a gentle and charming style, the memoir is filled with reflections on war, peace, history, freedom of expression, and filmmaking. Thuy also offers a firsthand account of the war in Vietnam and its aftermath from a Vietnamese perspective, adding a dimension rarely encountered in English-language literature.
AUTHOR BIOGRAPHY
Trn Van Thuy is a filmmaker and director. Lê Thanh Dung is a writer and translator. Wayne Karlin is an author and professor of languages and literature at the College of Southern Maryland. Eric Henry is former senior lecturer in the Asian Studies Department at the University of North Carolina, Chapel Hill. Nguyên Quang Dy is a former Harvard Nieman Fellow and independent journalist in Hanoi.
REVIEWS
-- Viet Thanh Nguyen, author of the Pulitzer Prize winning novel The Sympathizer


-- Maxine Hong Kingston, author of The Fifth Book of Peace, and editor of Veterans of War, Veterans of Peace