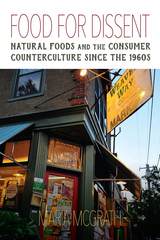 <P>In the 1960s and early 1970s, countercultural rebels decided that, rather than confront the system, they would create the world they wanted. The natural foods movement grew out of this contrarian spirit. Through a politics of principled shopping, eating, and entrepreneurship, food revolutionaries dissented from corporate capitalism and mainstream America.</P><P>In Food for Dissent, Maria McGrath traces the growth of the natural foods movement from its countercultural fringe beginning to its twenty-first-century "food revolution" ascendance, focusing on popular natural foods touchstones -- vegetarian cookbooks, food co-ops, and health advocates. Guided by an ideology of ethical consumption, these institutions and actors spread the movement's oppositionality and transformed America's foodscape, at least for some. Yet this strategy proved an uncertain instrument for the advancement of social justice, environmental defense, and anti-corporatism. The case studies explored in Food for Dissent indicate the limits of using conscientious eating, shopping, and selling as tools for civic activism.</P>
AUTHOR BIOGRAPHY
<P>MARIA MCGRATH is professor of humanities and history at Bucks County Community College.</P>
REVIEWS
<P>Food for Dissent is clearly written, engaging, and enjoyable to read. McGrath astutely explores the goals and contradictions inherent in alternative approaches to food production and consumption.</P> <P>Well researched and intellectually rich, Food for Dissent joins an emerging literature that rethinks the counter-culture in American life, especially how it intersected with capitalism in the 1970s and reimagined whole sectors of the economy over the last fifty years.</P>