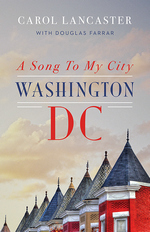 This deeply felt memoir is a love letter to Washington, DC. Carol Lancaster, a third-generation Washingtonian who knew the city like few others, takes readers on a tour of the nation’s capital from its swamp-infested beginnings to the present day, with an insider’s view of the gritty politics, environment, society, culture, and larger-than-life heroes that characterize her beloved hometown. The former dean of Georgetown University’s School of Foreign Service, a friend of presidents and dignitaries all over the globe, Lancaster colorfully describes the city’s three near-death experiences and the many triumphs and tribulations that emerged as the city took shape. Along the way she provides brief biographies of three of the most influential figures in the city’s history: urban designer Pierre Charles L’Enfant, whose vision for the city was realized only after his death; civic leader “Boss” Shepherd, whose strong-arm tactics cleaned up the downtown area and helped create the walking mall we know today; and controversial mayor Marion Barry, whose rise and fall and resurrection underscored the contemporary challenges of home rule.

Teeming with informative anecdotes and two dozen illustrations of landmarks and key characters, Lancaster’s memoir is a personal and passionate paean to the most powerful city in the world—from one of its most illustrious native daughters.

Carol Lancaster was the dean of the School of Foreign Service at Georgetown University from 2010 until her death in 2014. A member of the US Department of State's policy planning staff and then deputy assistant secretary of state for Africa, she came to SFS in 1981 as a research professor; she later became director of the Africa Studies program. From 1993 to 1996, Carol took a leave of absence from her academic work to serve as deputy administrator of the US Agency for International Development. She was the author of several books including Foreign Aid: Diplomacy, Development, Domestic Politics.

Douglas Farrar, Carol Lancaster’s son, is a policy and communications professional living and working in Washington, DC. A fourth-generation Washingtonian, he completed his mother’s book after her death.