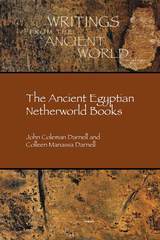 The ancient Egyptian Netherworld Books, important compositions that decorated the New Kingdom royal tombs in the Valley of the Kings, present humanity's oldest surviving attempts to provide a scientific map of the unseen realms beyond the visible cosmos and contain imagery and annotations that represent ancient Egyptian speculation (essentially philosophical and theological) about the events of the solar journey through the twelve hours of the night. The Netherworld Books describe one of the central mysteries of Egyptian religious belief—the union of the solar god Re with the underworldly god Osiris—and provide information on aspects of Egyptian theology and cosmography not present in the now more widely read Book of the Dead. Numerous illustrations provide overview images and individual scenes from each Netherworld Book, emphasizing the unity of text and image within the compositions. The major texts translated include the Book of Adoring Re in the West (the Litany of Re), the Book of the Hidden Chamber (Amduat), the Book of Gates, the Book of Caverns, the Books of the Creation of the Solar Disk, and the Books of the Solar-Osirian Unity.

John Coleman Darnell is Professor of Egyptology at Yale University. Darnell is the author of The Enigmatic Netherworld Books of the Solar Osirian Unity: Cryptographic Compositions in the Tombs of Tutankhamun, Ramesses VI, and Ramesses IX, as well as numerous other monographs and articles, including publications of several archaeological and epigraphic sites his expeditions have discovered in the Eastern and Western Deserts of Egypt.

Colleen Manassa Darnell is a curatorial affiliate at the Yale Peabody Museum of Natural History and teaches art history at the University of Hartford. She is the author of Imagining the Past: Historical Fiction in New Kingdom Egypt, as well as a major study of the Late Period versions of the Netherworld Books, along with other articles and monographs.