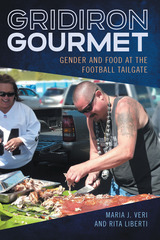 On football weekends in the United States, thousands of fans gather in the parking lots outside of stadiums, where they park their trucks, let down the gates, and begin a pregame ritual of drinking and grilling.

Tailgating, which began in the early 1900s as a quaint picnic lunch outside of the stadium, has evolved into a massive public social event with complex menus, extravagant creative fare, and state-of-art grilling equipment. Unlike traditional notions of the home kitchen, the blacktop is a highly masculine culinary environment in which men and the food they cook are often the star attractions.

Gridiron Gourmet examines tailgating as shown in television, film, advertising, and cookbooks, and takes a close look at the experiences of those tailgaters who are as serious about their brisket as they are about cheering on their favorite team, demonstrating how and why the gendered performances on the football field are often matched by the intensity of the masculine displays in front of grills, smokers, and deep fryers.
AUTHOR BIOGRAPHY
Maria J. Veri is associate professor of kinesiology at San Francisco State University.

Rita Liberti is professor of kinesiology at California State University, East Bay, where she is the founding director of the Center for Sport and Social Justice.
TABLE OF CONTENTS
Contents
Acknowledgments
Series Editor's Preface
Introduction
1. "As Welcome as Lunch at the Ritz": Episodes in the History of Tailgating
2. Cooking Steak with a Hatchet and a Hubcap: Spectacle on the Blacktop
3. "We're in the Steel Business, There's Not A Lot of Vegetarians": Meat in Tailgate Culture
4. 'Ethnic Edibles' and 'Hindu' Spices: Racial and Ethnic Representation in Tailgate Cookbooks
5. Culinary Community on the Blacktop
Conclusion
Notes
Bibliography
Index
REQUEST ACCESSIBLE FILE