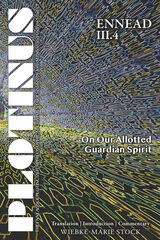 Plotinus Ennead III.4: On Our Allotted Guardian Spirit: Translation with an Introduction and Commentary
by Wiebke-Marie Stock
Parmenides Publishing, 2020
Paper: 978-1-7335357-0-0
On Our Allotted Guardian Spirit is a lively and at times perplexing text combining general reflections on the nature of the soul with a discussion of the phenomenon of a personal guardian spirit. Plotinus wants to interpret Plato, and aims to integrate Plato's various statements about daimones into one comprehensive theory. This leads to some views that are, if not exotic, then at least strange on first encounter. However, a closer reading reveals that Plotinus is not interested in demonology per se. Instead, the central concern of the treatise are ideas about the soul, the self, and self-consciousness. Plotinus' explorations produce a theory of the mind as the agent and activity responsible for a person’s ethical choices and conduct of life. The demon emerges as a philosophical tool passed down from Plato, but adapted and rationalized to try to explain motivation to action, the impulse toward the ethical life, and even the various differences in human ethical and psychological constitution. This innovative theory is a response to a strong and ongoing current of thought in the philosophical tradition.

The introduction offers an overview of ancient demonologies, starting with Homer and the Presocratics, and is followed by an in-depth examination of Plato, the Stoics, Plotinus, and later Neoplatonic developments. As such the book presents Plotinus’ specific rationalizing response to the idea of a guardian spirit in the context of ancient philosophical demonologies.
AUTHOR BIOGRAPHY
Wiebke-Marie Stock (University of Bonn, Germany) is Guest Research Assistant Professor at the University of Notre Dame’s Medieval Institute. She specializes in ancient philosophy, with a particular focus on epistemology, metaphysics, philosophy of religion, and aesthetics. Her recent publications include Theurgisches Denken (2008) on the philosophical relevance of the treatise “Ecclesiastical Hierarchy” by Dionysius the Areopagite, and Denkumsturz (2012) on Hugo Ball’s aesthetic, political, and religious-philosophical thought.