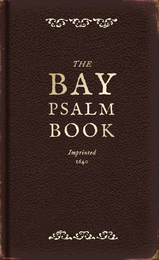 The Bay Psalm Book: A Facsimile
introduction by Diarmaid MacCulloch
Bodleian Library Publishing, 2014
Cloth: 978-1-85124-414-0
The Bay Psalm Book was the first book to be printed in North America, twenty years after the arrival of the Pilgrims in Massachusetts. Today, only eleven copies are still in existence and fetch as much as fourteen million dollars at auction, making it also the most expensive book in the world.

Originally published in 1640 as The Whole Booke of Psalmes Faithfully Translated into English Metre, the unassuming psalter undertook the translation of Hebrew psalms into English verse for a growing population of New England Puritans unhappy with contemporary translations and in need of a version that would better represent their beliefs. The book became popularly known as The Bay Psalm Book, named after the Massachusetts Bay Colony in which its translators—among them the ministers John Cotton and Richard Mather—lived.

This beautiful facsimile edition of The Bay Psalm Book reproduces one of the best remaining copies of the psalter, including the translators’ preface and the original printer’s errors and binding marks. An introduction by Diarmaid MacCulloch details the book’s place in American religious and cultural history and explains how the psalter came to have such a profound effect on the course of the Protestant faith in America.
TABLE OF CONTENTS


Introduction by Diarmaid MacCulloch (with Bibliography and Endnotes)
Facsimile