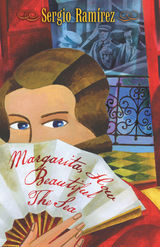 In 1956 in a cafe in León, a group of literati gather, dedicated, among other things, to the rigorous reconstruction of the legend surrounding Darío—but also to conspire. There will be an attempt against dictator Somoza's life, and that little girl with the fan a half-century before will not be a disinterested party.

In Margarita, How Beautiful the Sea, Sergio Ramírez encompasses, in a complete metaphor of reality and legend, the entire history of his country. The narrative moves along paths fifty years apart, which inevitably converge. The story becomes a fascinating exercise on the power of memory, on the influence of the past, fictitious or not, in the finality of reality.

AUTHOR BIOGRAPHY
Sergio Ramírez is a leading Nicaraguan writer and intellectual who served in the Junta of National Reconstruction and as vice president of the country from 1984 until 1990. He is the author of over thirty books and is the recipient of numerous honors, including the L'Ordre du Chevalier des Arts et des Lettres in France.

Michael B. Miller, former professor of Spanish and Latin American literatures, holds a PhD from George Washington University. He has translated numerous works from Spanish, including A Place Called Milagro de la Paz by Manlio Argueta.