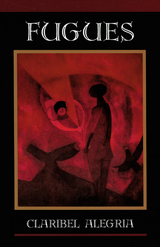 Well-known for her incisive descriptions of war and violence in El Salvador, Claribel Alegría is one of Central America's most eminent poets. In Fugues, a lucid and strikingly beautiful original collection, she looks squarely into the face of mortality, love, and aging, to explore the personal as well as universal questions that face each human being.
AUTHOR BIOGRAPHY
Claribel Alegría was a Salvadorian-Nicaraguan poet, essayist, novelist, and journalist who was a major voice in the literature of contemporary Central America. She has been called "one of the region's finest writers" by The Washington Post. Alegría published over forty books, including fifteen collections of poetry, and was a recipient of the Casa de las Americas Prize of Cuba. Her works in English include Ashes of Izalco, Luisa in Realityland, and Family Album. She was awarded the 2006 Neustadt International Prize for Literature. She died in 2018.

In 1947 Alegría married the U.S.-born journalist Darwin J. ("Bud") Flakoll; they had three daughters and one son. Flakoll coauthored some of her novels and translated much of her work into English. He died in 1995. Alegría's Sorrow, a collection of love poems, was written for her deceased husband.