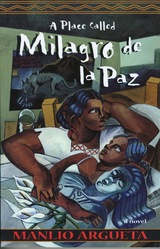 A Place Called Milagro de la Paz
by Manlio Argueta
translated by Michael B. Miller
Northwestern University Press, 2000
Paper: 978-1-880684-68-9
This remarkable novel continues the saga of life among the common people in El Salvador begun with One Day of Life. A Place Called Milagro de la Paz tells the story of the courage and strength of two women, a single mother and her daughter, who have to overcome the trauma of the murder of the mother's older daughter and survive in an atmosphere of bitter poverty. The book is filled, however, with magical, lyric moments of love and hope, especially surrounding the figure of a strange young girl with butterflies in her hair who appears suddenly and adopts the family. The tiny family group bravely preserves traditional values in spite of fear and repression.
AUTHOR BIOGRAPHY

Manlio Argueta's novels have earned him an international reputation and have endeared him to the Salvadoran people. His first two novels, El valle de las hamacas (1970) and Caperucita en la zona roja (LittleRed Riding Hood in the Red Light District) (1978), present the social instability and political repression in the country during the seventies. Caperucita en la zona roja (Little Red Riding Hood in the Red Light District) received the Casa de las Americas Prize in 1977. His third and fourth novels, Un dia en la vida (1980) and Cuzcatian donde bate la mar del sur (1986) describe the escalating repression and rebellion in the late seventies. His fifth novel, Milagro de la Paz (1994) examines the legacy of civil strife in the lives of a Salvadoran woman and her family. His most recent work, a collection of poetry, was published in 2013. He currently lives in San Salvador.

Michael B. Miller is a former professor of Spanish and Latin American Literatures at Gallaudet University in Washington, D.C.