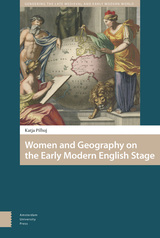 BUY
Women and Geography on the Early Modern English Stage
by Katja Pilhuj
Amsterdam University Press, 2019
eISBN: 978-90-485-4422-6
In a late 1590s atlas proof from cartographer John Speed, Queen Elizabeth appears, crowned and brandishing a ruler as the map's scale-of-miles. Not just a map key, the queen™'s depiction here presents her as a powerful arbiter of measurement in her kingdom. For Speed, the queen was a formidable female presence, authoritative, ready to measure any place or person. The atlas, finished during James' reign, later omitted her picture. But this disappearance did not mean Elizabeth vanished entirely; her image and her connection to geography appear in multiple plays and maps. Elizabeth becomes, like the ruler she holds, an instrument applied and adapted. *Women and Geography on the Early Modern English Stage* explores the ways in which mapmakers, playwrights, and audiences in early modern England could, following their queen™'s example, use the ideas of geography, or 'world-writing', to reshape the symbolic import of the female body and territory to create new identities. The book demonstrates how early modern mapmakers and dramatists -- men and women -- conceived of and constructed identities within a discourse of fluid ideas about space and gender.
AUTHOR BIOGRAPHY
[Katja Pilhuj](http://www.citadel.edu/root/english-faculty-staff/55-academics/schools/shss/english/21632-katherine-pilhuj) is Associate Professor of English in the Department of English, Fine Arts, and Communication at The Citadel, The Military College of South Carolina.
TABLE OF CONTENTS