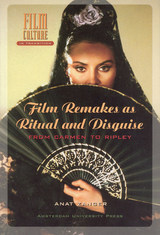 The first full-length history of the remake in cinema, Film Remakes as Ritual and Disguise is also the first book to explore how and why these stories are told.

Anat Zanger focuses on contemporary retellings of three particular tales—Joanof Arc, Carmen, and Psycho—to reveal what she calls the remake’s “rituals of disguise.” Joan of Arc, Zanger demonstrates, later appears as the tough, androgynous Ripley in the blockbuster Alien series and the God-ridden Bess in Lars Von Trier’s Breaking the Waves. Ultimately, these remake chains offer evidence of the archetypes of our own age, cultural “fingerprints” that are reflective of society’s own preferences and politics. Underneath the redundancy of the remake, Zanger shows, lies our collective social memory.  Indeed, at its core the lowly remake represents a primal attempt to gain immortality, to triumph over death—playing at movie theaters seven days a week, 365 days a year.

Addressing the wider theoretical implications of her argument with sections on contemporary film issues such as trauma, jouissance, and censorship, Film Remakes as Ritual and Disguise is an insightful addition to current debates in film theory and cinema history.

AUTHOR BIOGRAPHY
Anat Zanger is associate professor in the Film and Television Department at Tel Aviv University.
TABLE OF CONTENTS