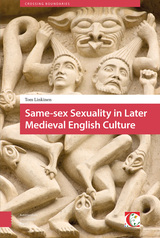 This volume investigates the state of same-sex relations in later medieval England, drawing on a remarkably rich array of primary sources from the period that include legal documents, artworks, theological treatises, and poetry. Tom Linkinen uses those sources to build a framework of medieval condemnations of same-sex intimacy and desire and then shows how same-sex sexuality reflected“and was inflected by“gender hierarchies, approaches to crime, and the conspicuous silence on the matter in the legal systems of the period.
AUTHOR BIOGRAPHY
Tom Linkinen is at the Turku Centre for Medieval and Early Modern Studies.
REVIEWS
“A rigorous yet warm-hearted book that provides an excellent systematic guide to a variety of possible conceptualizations of, and reactions to, same-sex sexual desire, sexual activity, and love. . . . In addition to a wide-ranging engagement with other scholars, the book is particularly valuable as a collation of primary sources relevant to this area of study. It should be highly recommended for teaching purposes and for those new to the field, and even experienced sexual historians are likely to find at least one unfamiliar reference or fresh interpretation within these pages.”
— H-Histsex