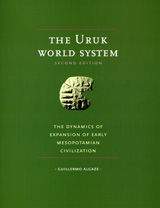 The Uruk World System: The Dynamics of Expansion of Early Mesopotamian Civilization, Second Edition
by Guillermo Algaze
University of Chicago Press, 2005
Paper: 978-0-226-01382-4
Most archaeologists and historians of the ancient Near East have focused on the internal transformations that led to the emergence of early cities and states. In The Uruk World System, Guillermo Algaze concentrates on the unprecedented and wide-ranging process of external expansion that coincided with the rapid initial crystallization of Mesopotamian civilization. In this extensive study, he contends that the rise of early Sumerian polities cannot be understood without also taking into account the developments in surrounding peripheral areas. This new edition includes a substantial new chapter that explores recent data and interpretations of the expansion of Uruk settlements across Syro-Mesopotamia.
AUTHOR BIOGRAPHY
Guillermo Algaze, a MacArthur Fellow, is professor and chair of the Department of Anthropology at the University of California, San Diego.
TABLE OF CONTENTS