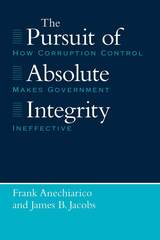 In this comprehensive and controversial case study of anticorruption efforts, Frank Anechiarico and James B. Jacobs show how the proliferating regulations and oversight mechanisms designed to prevent or root out corruption seriously undermine our ability to govern. By constraining decision makers' discretion, shaping priorities, and causing delays, corruption control—no less than corruption itself—has contributed to the contemporary crisis in public administration.

"Anechiarico and Jacobs . . . have pushed aside the claims and posturing by officials and reformers and revealed a critical need to reevaluate just what we have and are doing to public servants, and to the public, in the name of anti-corruption."—Citylaw

"A timely and very useful addition to the new debate over corruption and reform."—Michael Johnston, American Political Science Review
TABLE OF CONTENTS


Acknowledgments
Preface
1: The Evolution of Corruption: From "Honest Graft" to Conflicts of Interest
2: The Evolution of the Anticorruption Project: From Virtue to Surveillance
3: Civil Service and the Anticorruption Project: Bondage to a Principle
4: Conflicts of Interest and Financial Disclosures: The Pursuit of Absolute Integrity
5: Whistleblowers: Uncovering Wrongdoing at Any Price
6: Internal Government Investigation: The Panopticon in New York City
7: State and Federal Prosecutors: Putting Public Officials on Ice
8: Purging Corruption from Public Contracting: Blacklists, Debarments, and the Paralysis of Procurement
9: Auditing and Accounting Controls: Beyond Bean Counting
10: Waging War Against the Inevitable
11: Public Administration: From Reform to Pathology
12: Toward a New Discourse on Corruption Control
Notes
Bibliography
Table of Cases
Index