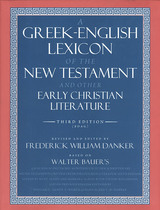 Danker's edition of Bauer's Wörterbuch will be an indispensable guide for Biblical and classical scholars, ministers, seminarians, and translators.
AUTHOR BIOGRAPHY
Walter Bauer (1877–1960) was a German theologian and scholar of the development of the early Christian churches.
TABLE OF CONTENTS