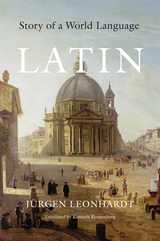 The mother tongue of the Roman Empire and the lingua franca of the West for centuries after Rome’s fall, Latin survives today primarily in classrooms and texts. Yet this “dead language” is unique in the influence it has exerted across centuries and continents. Jürgen Leonhardt has written a full history of Latin from antiquity to the present, uncovering how this once parochial dialect developed into a vehicle of global communication that remained vital long after its spoken form was supplanted by modern languages.

Latin originated in the Italian region of Latium, around Rome, and became widespread as that city’s imperial might grew. By the first century BCE, Latin was already transitioning from a living vernacular, as writers and grammarians like Cicero and Varro fixed Latin’s status as a “classical” language with a codified rhetoric and rules. As Romance languages spun off from their Latin origins following the empire’s collapse—shedding cases and genders along the way—the ancient language retained its currency as a world language in ways that anticipated English and Spanish, but it ceased to evolve.

Leonhardt charts the vicissitudes of Latin in the post-Roman world: its ninth-century revival under Charlemagne and its flourishing among Renaissance writers who, more than their medieval predecessors, were interested in questions of literary style and expression. Ultimately, the rise of historicism in the eighteenth century turned Latin from a practical tongue to an academic subject. Nevertheless, of all the traces left by the Romans, their language remains the most ubiquitous artifact of a once peerless empire.

REVIEWS
One of the many achievements of Leonhardt’s book is to give readers, for the first time, a sense of what Latin has meant, and what it has been most useful for, in every period of Western history… Leonhardt’s informative and useful book ends with a plea to teach Latin as a living language, but the bulk of his work is historical: a lucid, erudite account of the history of Latin, from its origins as a literary language in the third century BCE up to the present… Leonhardt’s comparative approach illuminates the entire book… Leonhardt has dethroned Latin from its traditional position as a marmoreal, static sidekick to Greek and taught us to understand the history not only of Latin, but of language and literature, in a new way. His approach seems natural in a time of intellectual globalization, but it is the fruit of hard thinking, and adds to our sense of the complex ways in which language and power intersect.
-- Anthony Grafton London Review of Books


Given that the newly mitred Pope Francis is a freak for Latin, and that the Vatican’s two most recent Latin czars have been clerics from the American Midwest, stateside Catholics and Latin nerds alike should be frothy-mouthed at the new, significantly expanded edition of Jürgen Leonhardt’s Latin: Story of a World Language, translated with elegance by Kenneth Kronenberg… Leonhardt’s tour through Latin’s post-Roman afterlives, and his own experience speaking the language, galvanize a very neat argument that blends a linguistic approach (which has pronounced Latin dead) with a cultural-historical approach (by which standard Latin is merely decrepit!). Learned and accessible, the book is stuffed with funny little anecdotes, from early Arab scholars grappling with the language to Angelina Jolie getting quod me nutrit me destruit tattooed on her lower abdomen.
-- Ted Scheinman Slate


Latin provides us with a deeper way of understanding the relationship between European culture and the language that sustained it for more than a thousand years… Latin reminds us that understanding our past can help to shape our future.
-- Gerald J. Rusello New Criterion


[A] must-read for anyone interested either in the status of Latin or in what Latinity has signified throughout any previous epoch of its existence.
-- Ben Lee and Branden Kosch Bryn Mawr Classical Review


The core strength of Leonhardt’s book is its discussion of how a language becomes a world language and how a canon forms… Kenneth Kronenberg’s translation, done collaboratively with Leonhardt, escorts Latin into English. Kronenberg translates German culture, too, sometimes substituting references to Rilke with those to Auden and T.S. Eliot. Leonhardt credits Kronenberg with making ‘parts of the English edition better than the German original.’ Now Latin can make its case in today’s world language.
-- Willis G. Reiger Chronicle of Higher Education


A neat little primer on the history of the Latin language.
-- Steve Donoghue Open Letters Monthly


Latin might be classified as a long-dead language—but this work reminds us that no one has informed Latin of that fact.
-- Bettany Hughes Prospect


A highly readable tour of the language, from antiquity, through the Renaissance, to its use in reports for the Council of the European Union in 2006.
-- Daisy Dunn Standpoint


Latin hasn’t seen a revival since the ninth century under western Europe’s first emperor, Charlemagne, in the wake of the Carolingian literary renaissance of the late eighth century. Time for it to be great again. Leonhardt chronicles the language from its origins in the classical period to its official end in 1806. He asserts that in losing competence in reading Latin text, we are losing conversations about the world’s greatest literature by influential thinkers. An important book for lovers of language.
-- Annalisa Pesek Library Journal


Long, nay, longer live the dead! Latin as a literary language became fixed as early as the first century BCE, only to thrive and flourish for almost two more millennia. Leonhardt has written a delightfully illuminating life of this supposedly dead world language.
-- Christopher B. Krebs, author of A Most Dangerous Book: Tacitus’s Germania from the Roman Empire to the Third Reich