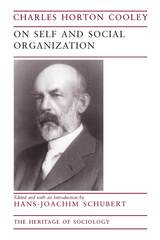 It is almost impossible now to imagine the prestigious position Charles Horton Cooley (1864-1929) held within the founding generation of American sociologists. His seminal work on human communication, social organization, and public opinion stimulated and guided much of early American sociological thought.

Cooley's work relating self and community is now more relevant than ever to the problems of understanding and directing modern democratic societies. Cooley applied the ideas of pragmatism to developing a systematic way of approaching social action, social change, and social order; he used these interrelated theories to analyze the social problems and cultural crises of the age. According to Cooley, social change is a fragile, interactive process that, due to constantly arising problems of action, requires ongoing scrutiny by the public. This collection of Cooley's best work is an important contribution not only to the history of ideas—especially to the origin of modern sociological theory— but also to the current public debate on civil society, community, and democracy.


Acknowledgments
Introduction
Part I: Early Writings
Transcendentalism
1: Some Teachings of Emerson
2: On Autobiographies
Theory of Transportation
3: Transportation and Organized Society - General
4: Transportation and Economic Organization
Darwinism
5: The Process of Social Change
Part II: The Foundations of Cooley's Sociology and Social Psychology
The Plasticity of Human Nature
6: Heredity and Instinct in Human Life
Communication and Understanding
7: Sympathy or Understanding as an Aspect of Society
8: The Significance of Communication
9: The Roots of Social Knowledge
Individual and Society
10: Society and the Individual
11: Social and Individual Aspects of Mind
12: Particularism versus the Organic View
Part III: The Self, Social Order, and Social Change
The Looking-Glass Self
13: The Social Self - the Meaning of "I"
Social Order and Democracy
14: Primary Groups
15: The Theory of Public Opinion
16: Democracy and Distinction
17: Open Classes
Social Change and the Pragmatic Method
18: The Tentative Method
19: Intelligence in Social Function
20: Social Science
21: The Tentative Character of Progress
22: A Primary Culture for Democracy
Index of Names
Subject Index