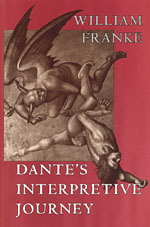 Critically engaging the thought of Heidegger, Gadamer, and others, William Franke contributes both to the criticism of Dante's Divine Comedy and to the theory of interpretation.

Reading the poem through the lens of hermeneutical theory, Franke focuses particularly on Dante's address to the reader as the site of a disclosure of truth. The event of the poem for its reader becomes potentially an experience of truth both human and divine. While contemporary criticism has concentrated on the historical character of Dante's poem, often insisting on it as undermining the poem's claims to transcendence, Franke argues that precisely the poem's historicity forms the ground for its mediation of a religious revelation. Dante's dramatization, on an epic scale, of the act of interpretation itself participates in the self-manifestation of the Word in poetic form.

Dante's Interpretive Journey is an indispensable addition to the field of Dante studies and offers rich insights for philosophy and theology as well.
TABLE OF CONTENTS


Preface
Introduction: Truth and interpretation in the Divine Comedy
1: Historicity of Truth
2: Truth through Interpretation and the Hermeneutic of Faith
3: Interpretive Ontology: Dante and Heidegger
Ch. 1: The Address to the Reader
1: The Ontological Import of the Address to the Reader
2: Reader's Address as Scene of the Production of Sense
3: Truth, Sendings, Being-Addressed: Deconstruction versus Hermeneutics or Dialogue with Derrida?
4: A Philological Debate: Auerbach and Spitzer
5: Petrarch, Boccaccio, and the Fiction of Philology
Ch. 2: Dante's Hermeneutic Rite of Passage: Inferno IX
1: Blockage
2: Passage
3: Ambiguities
4: Appendix: Hermeneutics, Phenomenology, and the Meaning of a Modern Understanding of Dante
Ch. 3: The Temporality of Conversion
1: Interpretation as Ontological Repetition and Dante's Fatedness
2: Ecstatic and Repetitive Temporality
3: Phenomenology of Fear/Anxiety in Inferno I
4: Dantesque Allegory and the Act of Understanding
Ch. 4: The Making of History
1: Relocating Truth: From Historical Sense to Reader's Historicity
2: Reality and Realism in Purgatorio X
3: Some History (and a Reopening) of the Question of the Truth of the Commedia
Ch. 5: Resurrected Tradition and Revealed Truth
1: Dante's Statius
2: Hermeneutics, Historicity, and Suprahistorical Truth
Recapitulatory Prospectus: A New Hermeneutic Horizon for Religious Revelation in Poetic Literature?
Core Bibliography of Recurrently Cited Sources
Index