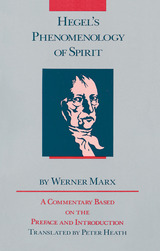 Hegel's Phenomenology of Spirit: A Commentary Based on the Preface and Introduction
by Werner Marx
translated by Peter Heath
University of Chicago Press, 1988
Paper: 978-0-226-50923-5
Hegel's classic Phenomenology of Spirit is considered by many to be the most difficult text in all of philosophical literature. In interpreting the work, scholars have often used the Phenomenology to justify the ideology that has tempered their approach to it, whether existential, ontological, or, particularly, Marxist. Werner Marx deftly avoids this trap of misinterpretation by rendering lucid the objectives that Hegel delineates in the Preface and Introduction and using these to examine the whole of the Phenomenology. Marx considers selected materials from Hegel's text in order both to clarify Hegel's own view of it and to set the stage for an examination of post-Hegelian philosophy.

The primary focus of Marx's book is on the account. Hegel gives of the phenomenological journey from natural consciousness to philosophical wisdom (or absolute knowledge, as Hegel calls it). In showing that Hegel's many statements concerning consciousness 'finding itself' or 'knowing itself' in its world can be understood as discovering the rationality of the conditioning world, Marx offers a solution to several sets of interrelated problems that have troubled students of Hegel. His book contains valuable analyses of the relation between Hegel's thought and that of Descartes and Kant as well as that of Karl Marx, and it also sheds considerable light on the question of the internal unity or coherence of the Phenomenology.
AUTHOR BIOGRAPHY
Werner Marx is professor emeritus and director of the Husserl-Archiv at the University of Freiburg. His Is There a Measure on Earth? is published by the University of Chicago Press.
TABLE OF CONTENTS


Foreword
Historical Review
I. Natural Consciousness
II. Phenomenal Knowledge
1. The Need for Philosophy
2. Conditions for the Presentation of Phenomenal Knowledge
III. Natural Consciousness and Science
IV. Reflection-Philosophy and Absolute Reflection
V. Consciousness and Spirit
1. The Concept of Spirit
2. The Method according to the Introduction
VI. The Role of the Phenomenologist and the Genesis of the Concept of Science
VII. The Idea of the Phenomenology of Spirit and Its Significance for the Understanding of Post-Hegelian Philosophy
Index