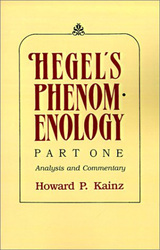 Kainz provides an accessible entry into the complexities of Hegelian thought by asking a series of questions about such matters as the literary form of the Phenomenology, its "plot," its relation to the "system," its subject matter, the problem of objectivity, dialectical necessity, the concept of "experience," and the Hegelian concept of consciousness. Building of the work of previous commentators, and presenting the work of these commentators in a clear and unbiased manner, Kainz offers an analysis that will be helpful both to experienced Hegelian scholars and to those readers preparing to approach the large and bewildering territory of the Phenomenology for the first time.
AUTHOR BIOGRAPHY
Howard P. Kainz is a professor of philosophy at Marquette University. He is the author of Hegel's Phenomenology, Parts I and II (Ohio, 1994, 1983) and An Introduction to Hegel: The Stages of Modern Philosophy (Ohio, 1996).