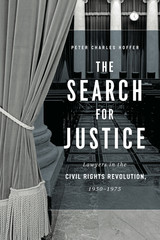 The civil rights era was a time of pervasive change in American political and social life. Among the decisive forces driving change were lawyers, who wielded the power of law to resolve competing concepts of order and equality and, in the end, to hold out the promise of a new and better nation.

The Search for Justice is a look the role of the lawyers throughout the period, focusing on one of the central issues of the time: school segregation. The most notable participants to address this issue were the public interest lawyers of the NAACP’s Legal Defense Fund, whose counselors brought lawsuits and carried out appeals in state and federal courts over the course of twenty years. But also playing a part in the story were members of the bar who defended Jim Crow laws explicitly or implicitly and, in some cases, also served in state or federal government; lawyers who sat on state and federal benches and heard civil rights cases; and, finally, law professors who analyzed the reasoning of the courts in classrooms and public forums removed from the fray. With rich, copiously researched detail, Hoffer takes readers through the interactions of these groups, setting their activities not only in the context of the civil rights movement but also of their full political and legal legacies, including the growth of corporate private legal practice after World War II and the expansion of the role of law professors in public discourse, particularly with the New Deal. Seeing the civil rights era through the lens of law enables us to understand for the first time the many ways in which lawyers affected the course and outcome of the movement.
AUTHOR BIOGRAPHY
Peter Charles Hoffer is distinguished research professor of history at the University of Georgia and coauthor, most recently, of The Federal Courts: An Essential History.
TABLE OF CONTENTS