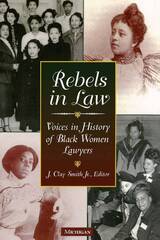 Black women lawyers are not new to the practice of law or to leadership in the fight for justice and quality. Black women formally entered the practice of American law in 1872, the year that Charlotte E. Ray became the first black woman to graduate from an American law school. Rebels in Lawintroduces some of these women and through their own writing tells a compelling story about the little-known involvement of black women in law and politics. Beginning with a short essay written in 1897, the writing collected by J. Clay Smith, Jr., tells us how black women came to the practice of law, the challenges they faced as women and as blacks in making a place for themselves in the legal profession, their fight to become legal educators, and their efforts to encourage other black women and black men to come to the practice of law.
The essays demonstrate the involvement of black women lawyers in important public issues of our time and show them addressing the sensitive subjects of race, equality, justice and freedom. Drawing together many writings that have never been published or have been published in obscure journals or newspapers, Rebels in Law is a groundbreaking study. In addition, it offers historical background information on each writer and on the history of black women lawyers. Providing an opportunity to study the origins of black women as professionals, community leaders, wives, mothers, and feminists, it will be of interest to scholars in the fields of law, history, political science, sociology, black studies and women's studies.
J. Clay Smith, Jr., is Professor of Law, Howard University Law School. He was formerly a member of the United States Equal Employment Opportunity Commission, Dean of Howard University Law School, and President of the Washington Bar Association. He is the author of Emancipation: The Making of the Black Lawyer, 1844-1944 and numerous articles.
REQUEST ACCESSIBLE FILE