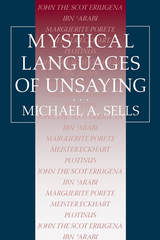 The subject of Mystical Languages of Unsaying is an important but neglected mode of mystical discourse, apophasis. which literally means "speaking away." Sometimes translated as "negative theology," apophatic discourse embraces the impossibility of naming something that is ineffable by continually turning back upon its own propositions and names. In this close study of apophasis in Greek, Christian, and Islamic texts, Michael Sells offers a sustained, critical account of how apophatic language works, the conventions, logic, and paradoxes it employs, and the dilemmas encountered in any attempt to analyze it.

This book includes readings of the most rigorously apophatic texts of Plotinus, John the Scot Eriugena, Ibn Arabi, Marguerite Porete, and Meister Eckhart, with comparative reference to important apophatic writers in the Jewish tradition, such as Abraham Abulafia and Moses de Leon. Sells reveals essential common features in the writings of these authors, despite their
wide-ranging differences in era, tradition, and theology.

By showing how apophasis works as a mode of discourse rather than as a negative theology, this work opens a rich heritage to reevaluation. Sells demonstrates that the more radical claims of apophatic writers—claims that critics have often dismissed as hyperbolic or condemned as pantheistic or nihilistic—are vital to an adequate account of the mystical languages of unsaying. This work also has important implications for the relationship of classical apophasis to contemporary languages of the unsayable. Sells challenges many widely circulated characterizations of apophasis among deconstructionists as well as a number of common notions about medieval thought and gender relations in medieval mysticism.
TABLE OF CONTENTS


Acknowledgments
Note to the Reader
Introduction/Unsaying
1: Awakening without Awakener: Apophasis in Plotinus
2: The Nothingness of God in John the Scot Eriugena
3: Ibn Arabi's Polished Mirror: Identity Shift and Meaning Event
4: Ibn Arabi's Garden among the Flames: The Heart Receptive of Every Form
5: Apophasis of Desire and the Burning of Marguerite Porete
6: Meister Eckhart: Birth and Self-Birth
7: Porete and Eckhart: The Apophasis of Gender
Epilogue
Notes
Selected Bibliography