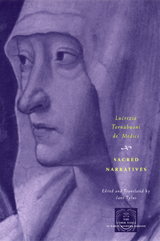 The most prominent woman in Renaissance Florence, Lucrezia Tornabuoni de' Medici (1425-1482) lived during her city's golden age. Wife of Piero de' Medici and mother of Lorenzo the Magnificent, Tornabuoni exerted considerable influence on Florence's political and social affairs. She was also, as this volume illustrates, a gifted and prolific poet.

This is the first major collection in any language of her extensive body of religious poems. Ranging from gentle lyrics on the Nativity to moving dialogues between a crucified Christ and the weeping sinner who kneels before him, the nine laudi (poems of praise) included here are among the few such poems known to have been written by a woman. Tornabuoni's five storie sacre, narrative poems based on the lives of biblical figures-three of whom, Judith, Susanna, and Esther, are Old Testament heroines-are virtually unique in their range and expressiveness. Together with Jane Tylus's substantial introduction, these poems offer us both a fascinating portrait of a highly educated and creative woman and a lively sense of cultural and social life in Renaissance Florence.
AUTHOR BIOGRAPHY
Jane Tylus is a professor of Italian and associate dean for the humanities in the College of Letters and Science, University of Wisconsin, Madison. Her books include Writing and Vulnerability in the Late Renaissance and Epic Traditions in the Contemporary World: The Poetics of Community, coedited with Margaret Beissinger and Susanne Wofford.
TABLE OF CONTENTS