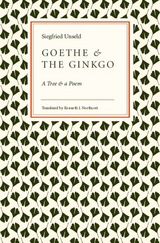 In 1815, Goethe gave symbolic expression to his intense relationship with Marianne Willemer, a recently married woman thirty-five years his junior. He gave her a leaf from the ginkgo tree, explaining that, like its deeply cleft yet still whole leaf, he was "single yet twofold." Although it is not known if their relationship was ever consummated, they did exchange love poetry, and Goethe published several of Marianne's poems in his West-East Divan without crediting her authorship.

In this beautiful little book, renowned Goethe scholar Siegfried Unseld considers what this episode means to our estimation of a writer many consider nearly godlike in stature. Unseld begins by exploring the botanical and medical lore of the ginkgo, including the use of its nut as an aphrodisiac and anti-aging serum. He then delves into Goethe's writings for the light they shed on his relationship with Marianne. Unseld reveals Goethe as a great yet human being, subject, as any other man, to the vagaries of passion.
AUTHOR BIOGRAPHY
Siegfried Unseld (1924-2002) was the publisher of Suhrkamp Verlag in Frankfurt for fifty years. He was also a scholar of German literature and wrote four books on Goethe, including Goethe and His Publishers, published in translation by the University of Chicago Press.