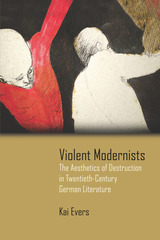 Accounts of rape, murder, mutilation, and torture run like a bloodred thread through modernist literature in the German language. Previous accounts of German literary modernism have linked its fascination with violent destruction either to the militant avant-garde on the left or to fascist modernism on the right. Critics have noted that high modernists depicted violence through its impact on their own victimized protagonists. But by minimizing and ignoring the often disturbing attraction to aggression in the works of Franz Kafka and others, these prevalent readings have filtered out much of the provocative and productive potential of German modernism.

Kai Evers’s Violent Modernists: The Aesthetics of Destruction in Twentieth-Century German Literature develops a new understanding of German modernism that moves beyond the oversimplified dichotomy of an avant-garde prone to aggression on the one hand and a modernism opposed to violence on the other. Analyzing works by Robert Musil, Franz Kafka, Karl Kraus, Walter Benjamin, Elias Canetti, and others, Evers argues that these authors are among the most innovative thinkers on violence and its impact on contemporary concepts of the self, history, and society.

AUTHOR BIOGRAPHY
Kai Evers is an associate professor of German at the University of California, Irvine.
TABLE OF CONTENTS
Contents
Acknowledgments
List of Abbreviations
Introduction
Chapter 1. Modernity, Modernism, and Violence
Chapter 2. Causing Violence: Robert Musil's The Confusions of Young Törless and the Path to an Antireductionist Theory of Violence
Chapter 3. War, Violence, and the Malleable Self: Robert Musil's Postwar Critique of Violence in The Man Without Qualities
Chapter 4. Kafka's Poetics of the Knife: On Violence, Truth, and Ambivalence in In the Penal Colony
Chapter 5. Chemical Warfare and Destructive Satires: Canetti and Benjamin's Search for the Murderous Substance of Satire
Conclusion
Notes
Bibliography
Index
REQUEST ACCESSIBLE FILE