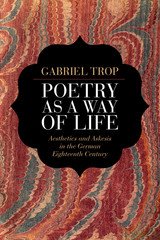 What would it mean to make a work of art the focal point of one’s life practice? Poetry as a Way of Life goes back to the origins of aesthetics as a philosophical discipline in the early eighteenth century in order to uncover an understanding of the work of art as an exercise of the self. Engaging in close readings of works by both canonical and less well-known eighteenth-century German poets such as Friedrich Holderlin, Novalis, Friedrich von Hagedorn, and Johann Wilhelm Ludwig Gleim, Gabriel Trop illustrates the ways in which these authors tap into the potential of poetic form to redefine the limits of human perception and generate alternative ways of being in the world.

Gabriel Tropis an assistant professor of Germanic and Slavic languages and literatures at the University of North Carolina, Chapel Hill.

REVIEWS
"In this study, Trop investigates poetry's effect on ways of perceiving the world and ways poetic texts can be the focal point in one's practice of life.... Summing Up: Recommended."  —CHOICE